An accessible video conference app for elders and children

Together is a video chat app specifically designed for children to interact with long distance grandparents. Over the course of 3 weeks, our team designed this app's interface to be more accessible and user friendly, conducted thorough user testing, and incorporated feedback from critiques to finalize an interface design. We contacted the founding team of the app to share our findings and proposals for improvements.

Long distance familial relationships, especially during lock-down in a pandemic, can be strained. Especially for the demographic of elderly folks and their grandchildren, both of which have a high likelihood of having trouble navigating technology, how can we design an app that meets the needs of both populations and bridge the gap of distance and emotion?

Together Video App is an accessible video conferencing app that actively facilitates bonding between elders and grandchildren, offering playful and educational activities in a memorable and easily learned virtual experience.

Identifying the needs of elders and children

For kids who are active and playful, a relatively static interface like Facetime and Zoom might not be the most engaging way to communicate. For grandparents who aren't technologically adept, these interfaces can be overwhelming and unclear. Together Video App serves both groups to create an emotional bonds despite the distance.

creating an interface that is easy to learn and simple to understand while also ensuring that users have a safe and playful experience. 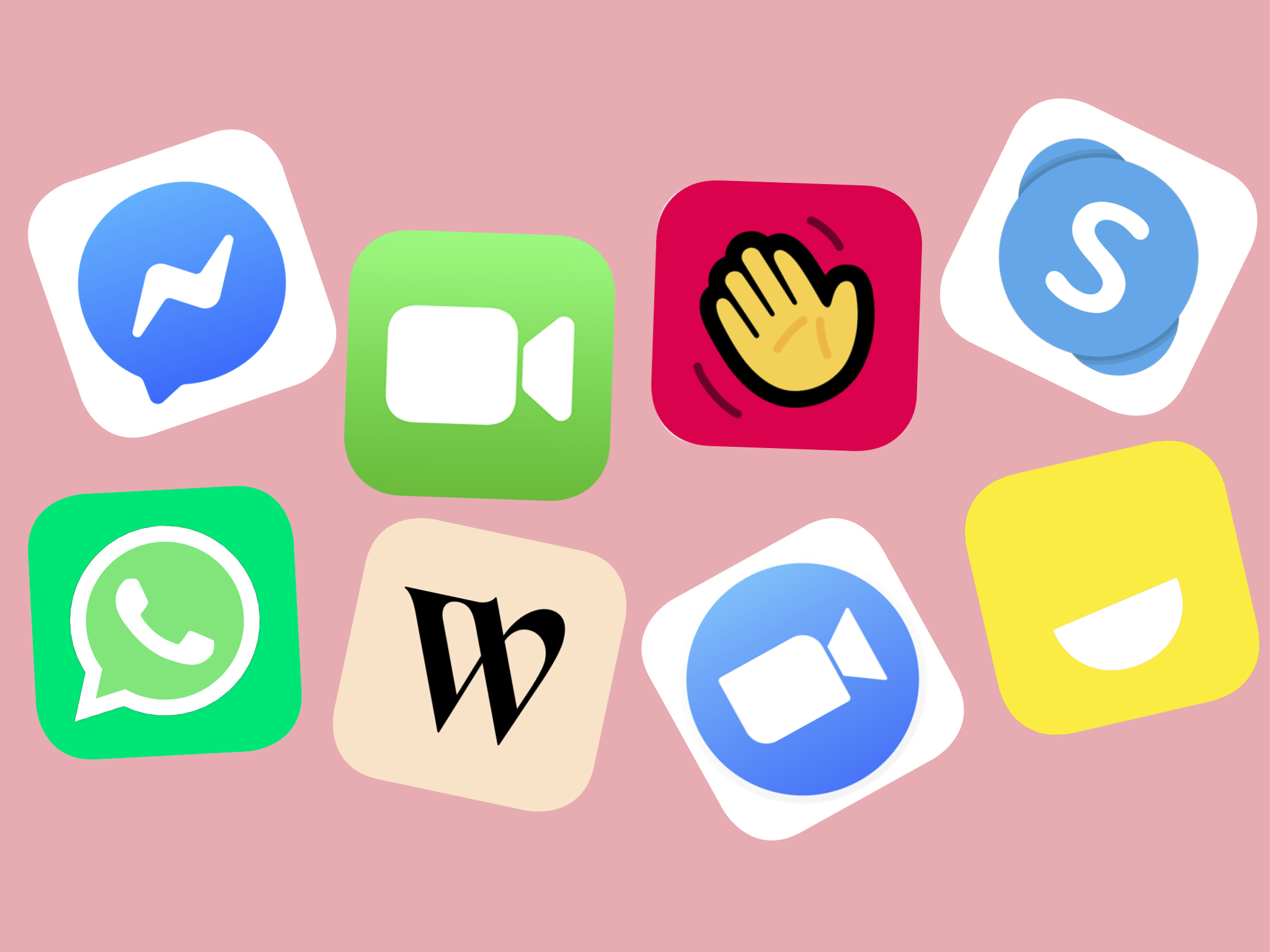 While it was useful to find inspiration from the structure of existing video-calling apps, no other popular video app specifically targets the needs of specifically elderly and young populations. We started off by brainstorming as many possible user interface ideas as possible; the following are our sketches. 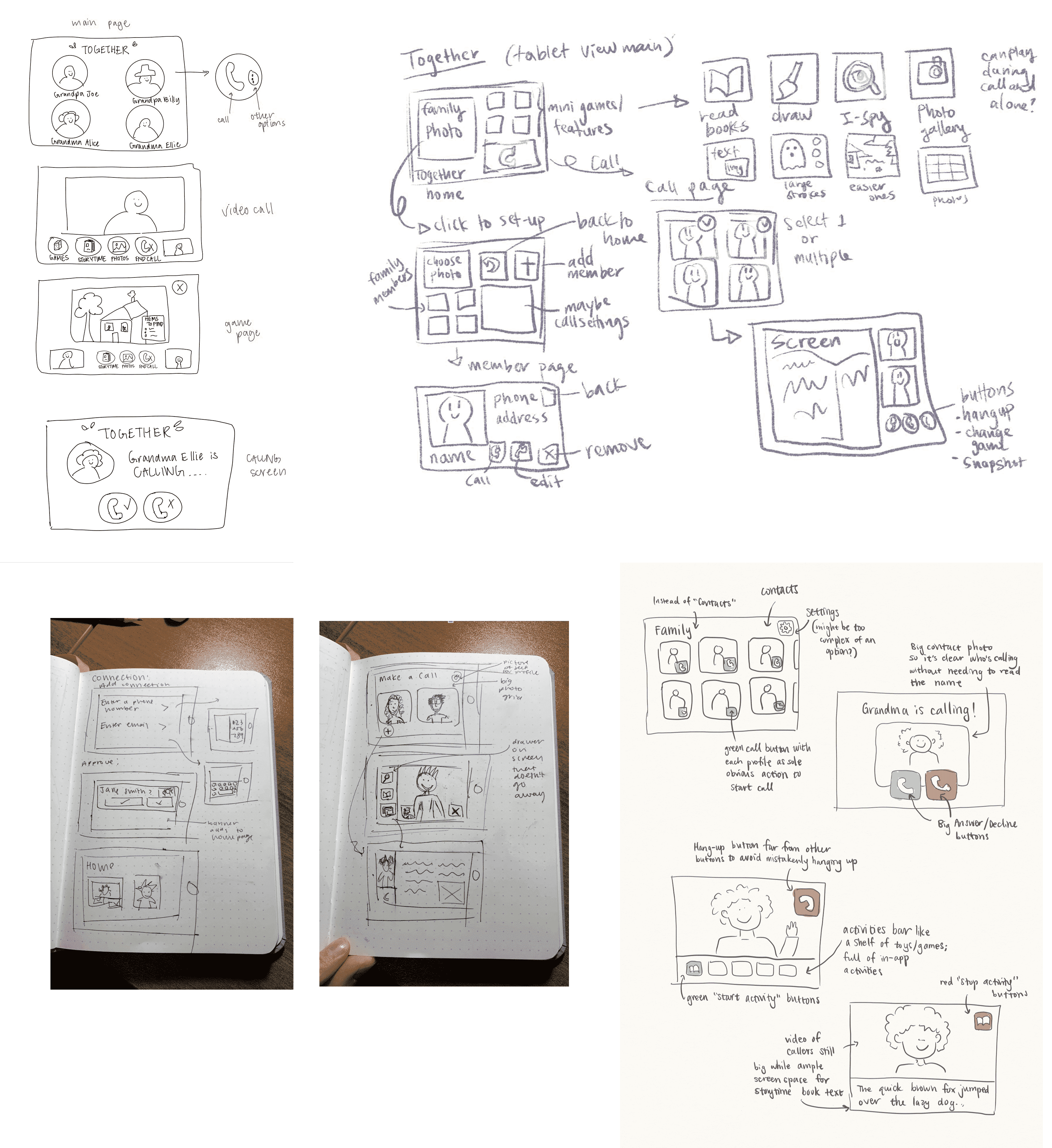 From the sketches, we discussed and narrowed down which screens would require the most focus and iteration for addition into a valuable and effective prototype. Our discussion of design elements for each chosen screen is summarized below.

We incorporated the strongest elements of each team member's ideas into our mockup, keeping in mind our specific audience's specific needs in regards to accessibility such as color contrast, literacy, and the interface's learnability. An important aspect we kept bringing up was the ease of navigating the user flow, knowing that users would primarily be children and grandparents. 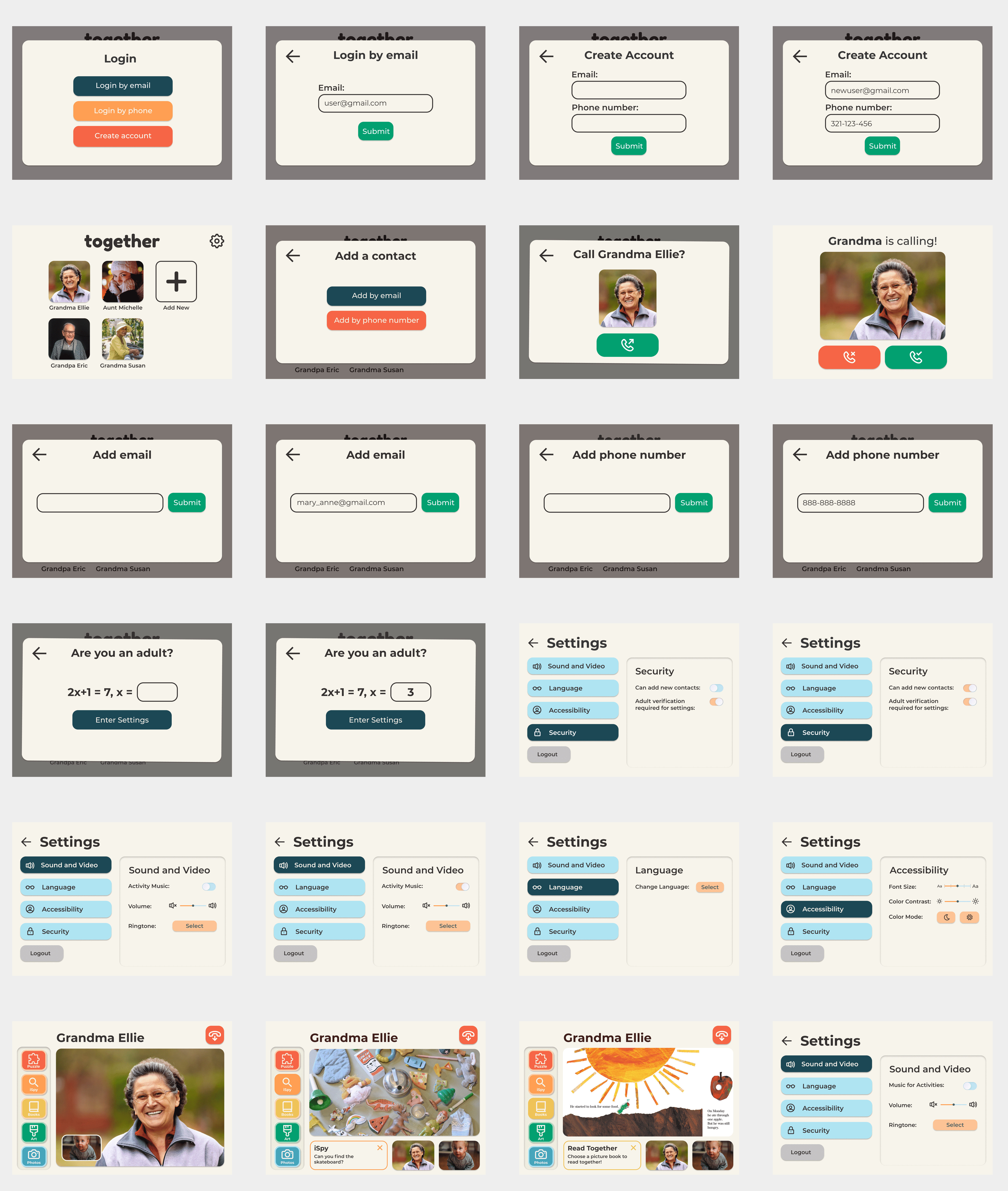 I focused especially on our color palette, keeping in mind how kids would best stay engaged with an interface along with how grandparents would react to simple versus overloaded screens.

Making accessibility the core of our application

We presented our prototype at a critique session with a professional UX Researcher, and received feedback and pointers on how to best approach different aspects of design that needed more iterations– most importantly, in the realm of accessibility and how we can make sure it stays central to every design decision. The general comments and takeaways of our session, as well as examples of specific cases where we then iterated on their feedback and advice, are summarized below. 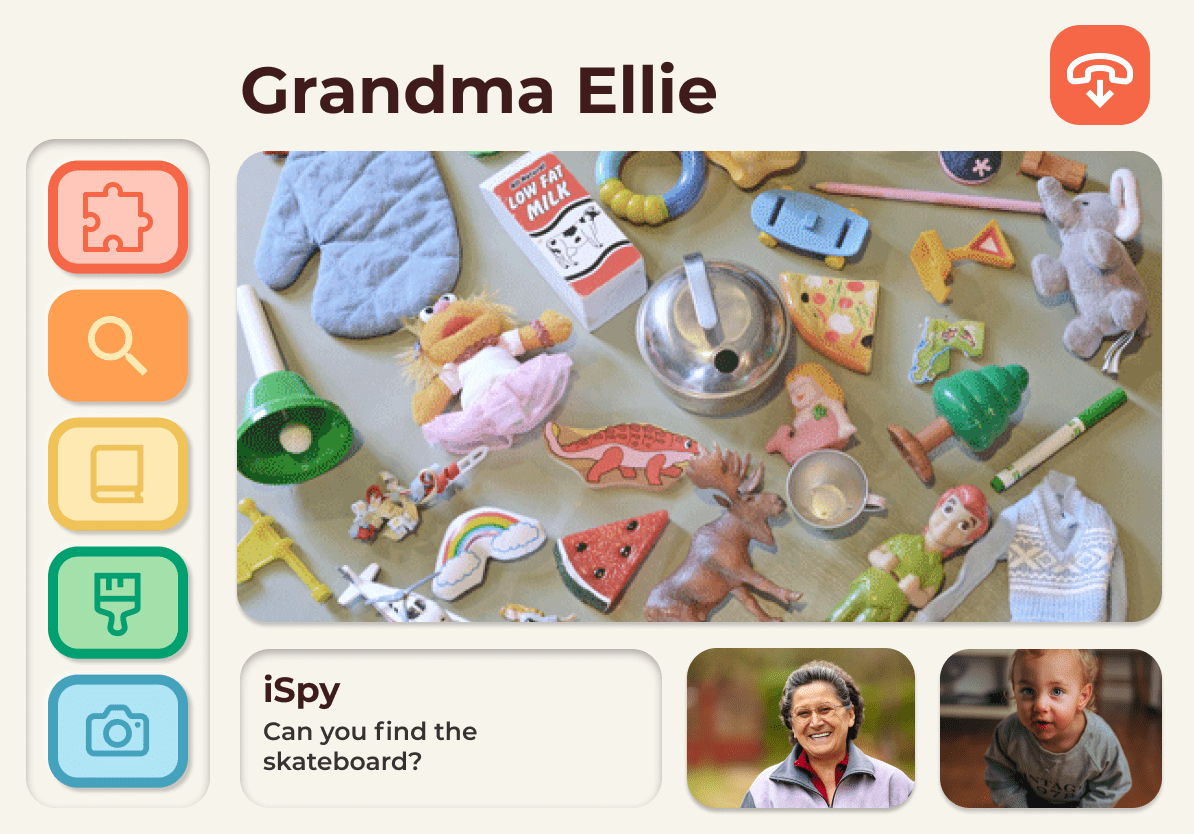 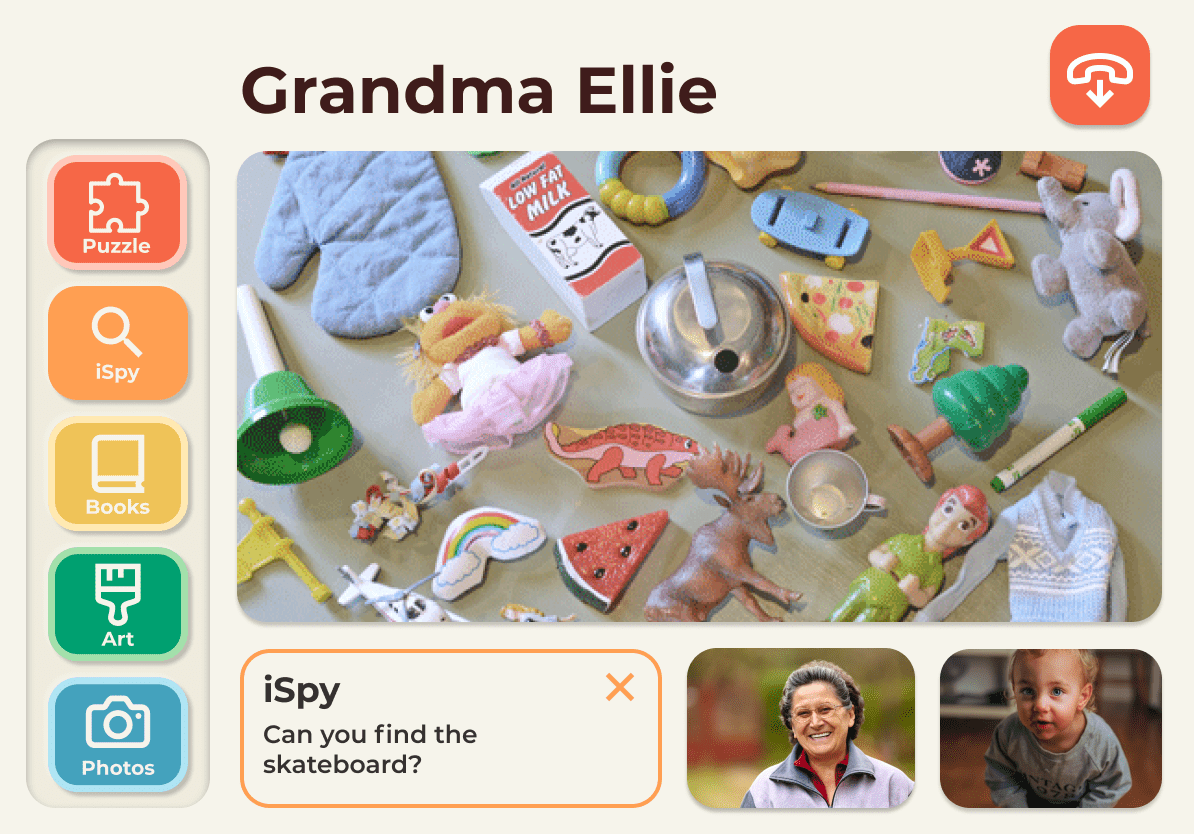 We added text labeling each button, added contrast to the colors of each button, and created an 'x' in the description area that allows the user to exit the activity. 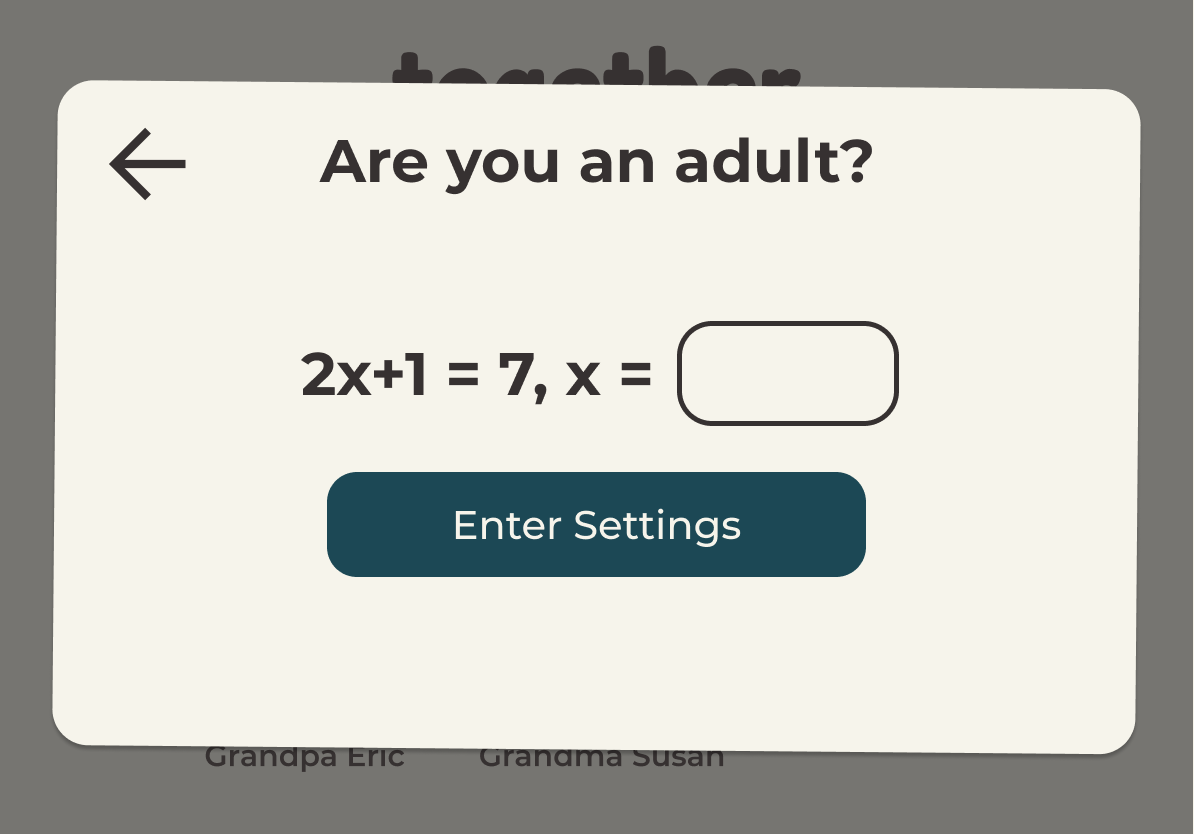 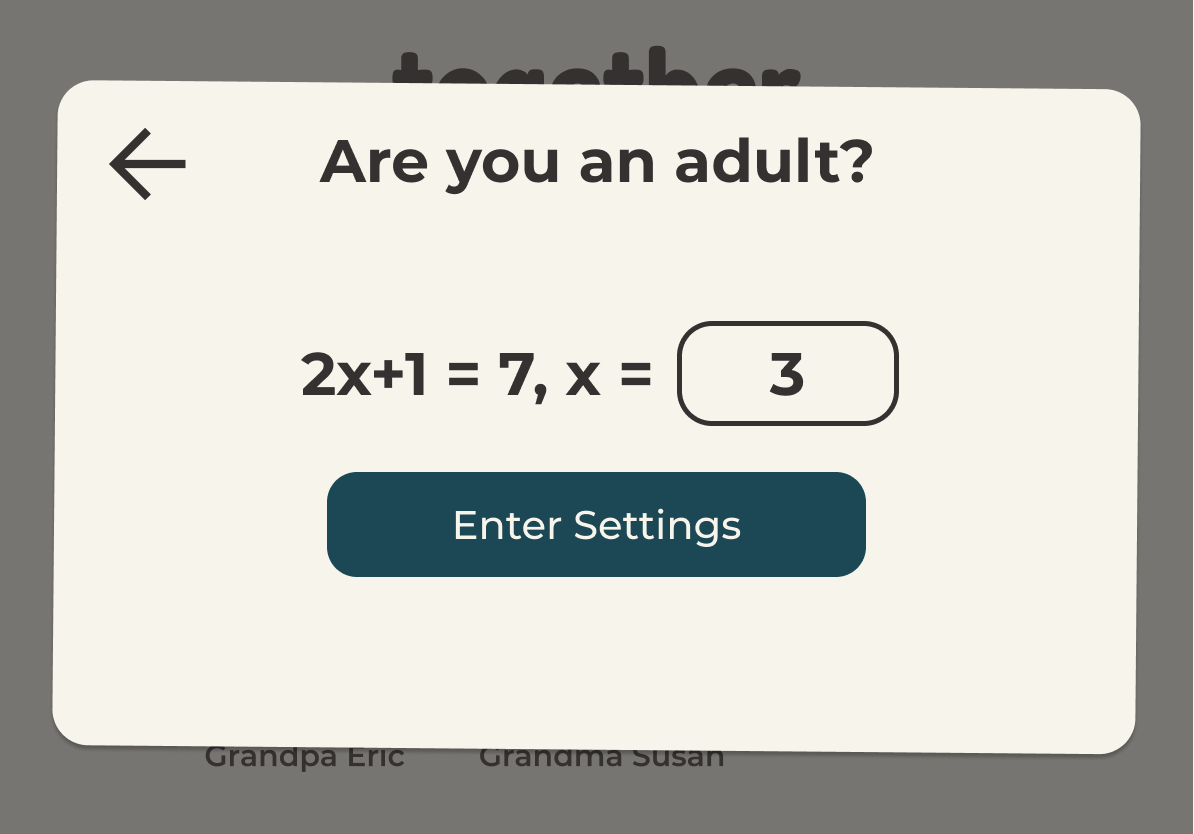 We wanted to ensure that parents had some control over how kids could interact with the app, and after debating possible solutions, we included a math problem before granting access to the settings. We thought that this would provide enough protection to deter kids, but not make it a hassle for grandparents and parents to access. 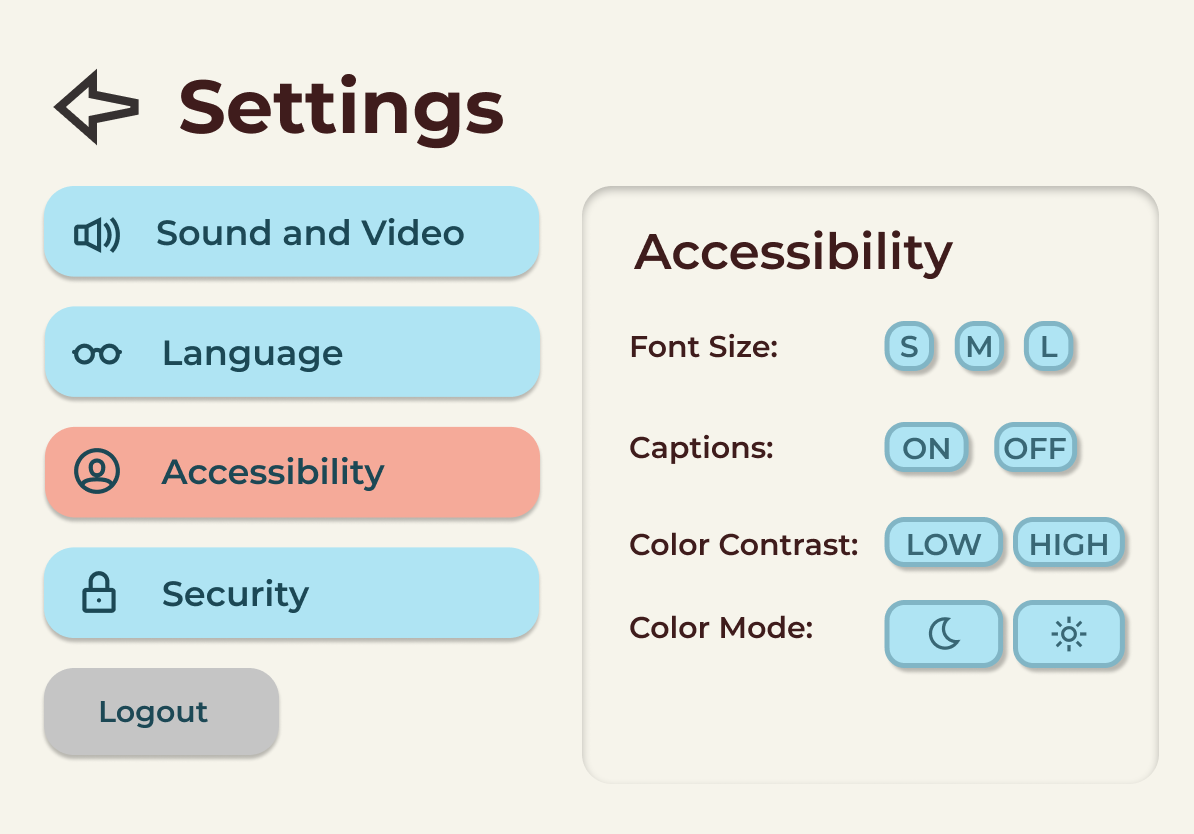 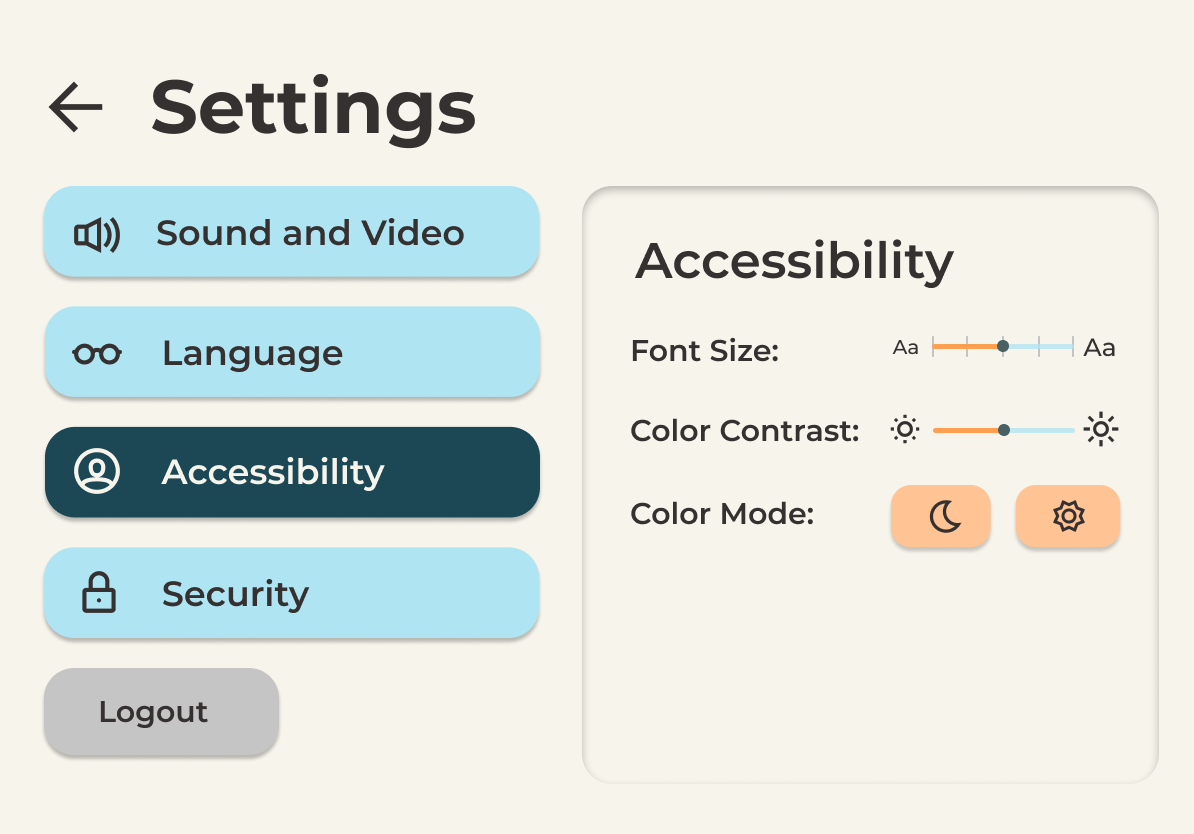 We renamed some settings and included sliders instead of only buttons. For example "contact filter" was renamed "can add new contacts," and font size and color contrast are sliders. We also made the changes in text size more obvious.

After incorporating feedback from our critique into our design prototype, we conducted user testing. We provided each of our users with a set of tasks, and watched recordings of them performing each sub-task and answering post-test questions.

We expected users to be able to log into the app, make a call, and explore a few options we had for in-call activities as these were our app's main features. Most users were able to complete the tasks easily, and we also received some compliments about how simple & easy to use our interface was.

Here's a rundown of our most important features and design decisions! We contacted the founding team of the app to share our findings and proposals for improvements.

Easy visual translation of a physical toybox onto the screen, simple symbols and bright colors makes it easy to understand

Parents expressed an immediate understanding and excitement of the concept and could see how they could use it with their children and their grandparents. One especially enthusiastic user said the following:

Before starting this project, I was a visual designer with little experience in user research. The two weeks provided a focused deep dive into how to make decisions informed by actual user feedback.

This was also my first time working on a design project with a team of other designers, and we all learned how to communicate and defend our own design decisions as well as provide constructive critique. Having user feedback to back up decision decisions proved itself invaluable.

Weighing varied needs within an audience

With an audience with such different and specific needs due to age and generational differences, it was an important challenge to see how we might address the specific necessities of different people's experiences.

See my other work →